Walk With Me: 'En Hier Is Lijf'

Rambling through the desperation of love

Loose sand makes it difficult to negotiate the dune, which looks out over the entire area covered by the narrative. A voice in the headphones wonders what the sand prevents us from seeing. Cinematic music facilitates our ascent. On reaching the summit, we will undoubtedly hear more about the search for a lost love. Musical Wanderstory En hier is lijf catapults the audience into a story about unsurpassed love and the desperation that ensues when it vanishes into thin air.

The instructions are clear. As a visitor (and thereby a participant) you are the one who determines what route to take, how long to stay in a particular spot, and how often to return to a specific location. An iPad is provided, which shows that the dune valley Hêdredersplak (near Hoorn on the Frisian island of Terschelling in the northern Netherlands) is divided into four areas. A baleful forest, the heath of rambling despair, the mystery dune, and the light-hearted woods. What follows is an overwhelming sequence of events that everyone experiences in their own way.

She's gone. That is how it starts. Gone with the wind and he cannot find her. Chased by ominous music and disjointed language, you traverse the baleful forest. Words pop up as they sometimes do in your head. Fragments continue to emerge, without logic or meaning. Then suddenly a concrete sentence appears out of nowhere: ‘I know that only death will be faithful to me.’ It appears as if someone is engaged in a desperate and rushed search. Or perhaps they are fleeing? Frighteningly, there is little to distinguish the two. To reach the light-hearted woods, I have to cross the heath of rambling despair. The words start to make sense; language becomes operational again. Memories fill in the contours of the story as musings fill out the characters.

Prior to entering the woods – near the foot of the mystery dune – I hear the words, ‘Before the fall you need to climb.’ I change my route and head upwards.At the zenith of a dune, the horizon is present on all sides. With as backdrop a wide view of the Terschelling landscape, the voice relates how he woke up and found she had disappeared. No footprints in the sand, apart from his own. He pledges he will continue to roam until he has found her. Never mind those horizons.

It is certainly not the first time (and probably not be the last time) that an audience is sent into the dunes, wearing headphones, during the island-wide Oerol festival, in order to imbibe poetry mixed with sounds. However, this performance is more than just a story that was inspired by the panoramic island and its natural beauty.

The text that Jibbe Willems wrote for this interactive walk maintains exactly the right balance between positing questions and providing answers. The narrative seamlessly merges with the format of the performance; it has a rambling and intuitive structure. The text, the music, and the audience's interpretation are equally important to the unfolding story. Jeroen Strijbos and Rob van Rijswijk have composed a score that emphasizes and juxtaposes emotions. The music is all the more powerful because it is absent at exactly the right moments. The order in which visitors arrive in the different areas colours the content and the context of the text.


Strijbos & Van Rijswijk composed the music and and Jibbe Willems wrote the storyline on location, which proved to be a fortuitous decision. It is obvious that, in each spot, their own associations and feelings have inform the sound fragments. Every sentence and section is pertinent, in terms of (poetic) content or emotions. This performance can and will only be experienced amid these woods, across this heath, and on these dunes but let's hope there will be a sequel to Musical Wanderstories, with new stories, in different locations.

After leaving the light-hearted woods (where I end my version of the story although it may be where other visitors set out), I hear how the two lovers have met. In a clearing in the dense pine forest, chance encounter between a boy and a girl at a party. Whereas the dialogue is almost mundane, it has breathtaking repercussions. He wants to kiss her but is afraid to do so (we are familiar with the game that plays out in people's heads in these circumstances). As he faces a still unknown girl, in an agony of doubt, fragments of the baleful forest and the heath of rambling despair invade my brain. I find myself hoping that he will not kiss her. 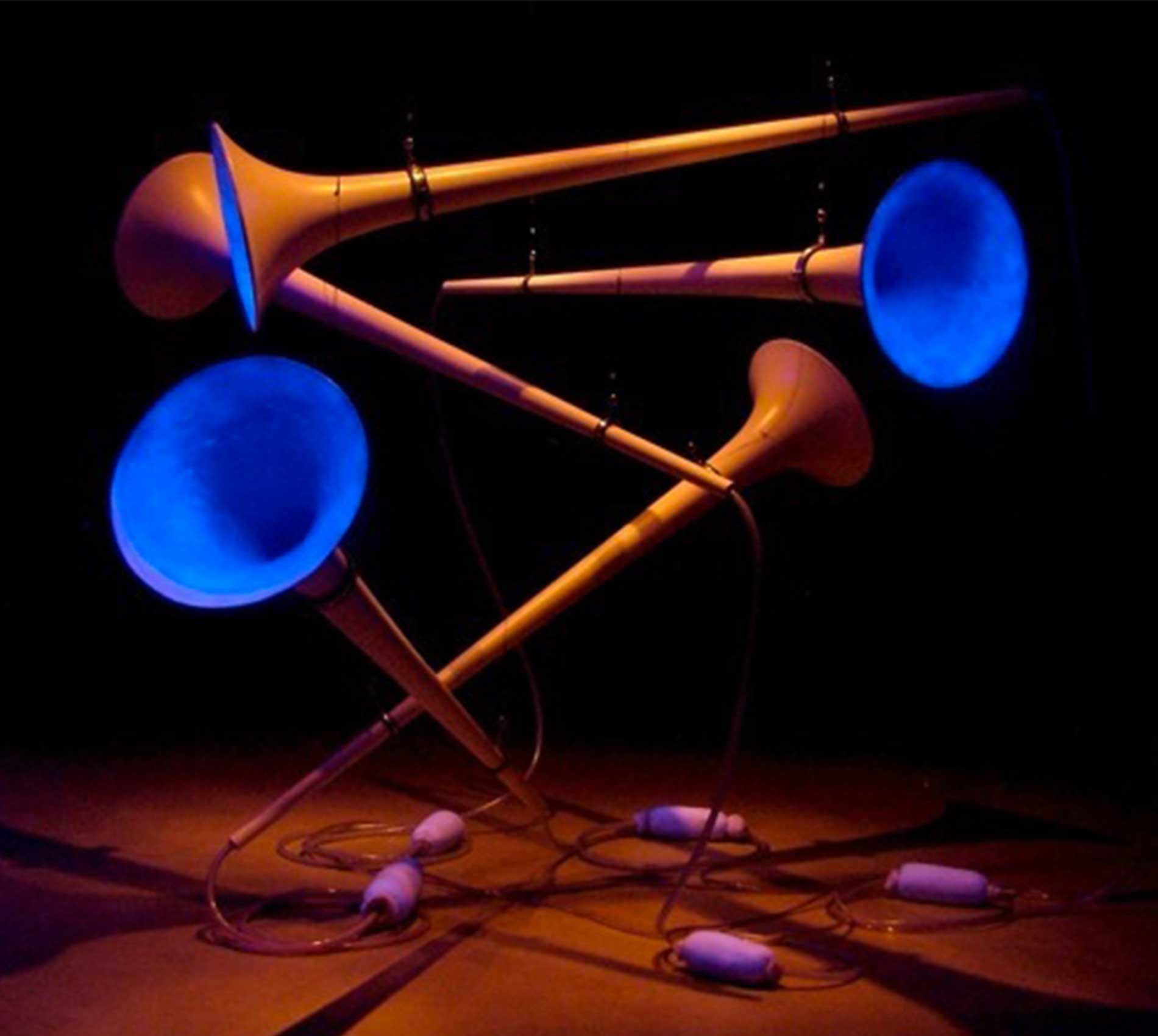 Music and architecture speak the same language of rhythm, contrast, proportion, dynamics and harmony. Music also has its own architecture: from the design of instruments to the aesthetics of the notation itself. In the Frozen Music exhibition, the design of space and sound is explored with interactive installations, art, film and music, architectural drawings and models. The Internationals Art Channel Foundation invites you to attend the premiere evening of the first series of three short artist portraits. These video portraits were made by Jan Doms (editor) and Tom Pijnenburg (camera and montage). Host Jan Zobel, dancer and choreographer, introduces the new Internationals Art Channel and the three short films about Strijbos & Van Rijswijk, Chikako Watanabe and Marjolein Landman.

The Man Who Fell From The Sky

The Man Who Fell From The Sky, Den Bosch The Netherlands Our new co-production with Panama Pictures production, 'The Man who fell from the sky', captures a collective sense of directionlessness and dislocation. The performers look like they have been washed ashore. High in the air they hang from the branches of an uprooted tree, balancing on moving platforms. Is this the aftermath of a disaster? The harbinger of a great change?