The many guises of the sea.

The work of sound artists and composers Rob van Rijswijk and Jeroen Strijbos (Tilburg, NL) concerns itself with an ongoing research into the experience of sound as a spatial phenomenon. That is what lies behind the installation SoundSpots, their GPS-based app Walk With Me and their composition Vox. The latter places the audience inside a circle of projection screens. These are also an essential element of 360º, a series of installations in which music and video are an integrated whole.

The idea behind this series is to collaborate with visual artists in developing installations that have image and sound interact. The visual component consists of a video projection on ten large screens arranged in a circle - four meters high and two and a half meters wide. An electroacoustic composition by Strijbos and Van Rijswijk, based on the same theme as the video, is played from ten loudspeakers mounted in the gaps between the screens, and from four powerful subwoofers placed in a square outside the circle. The audience are seated on a platform inside the circle. Referring to monumental video projections the makers call this set-up expanded sound cinema.

Visual artist Rob Moonen, also from Tilburg, made the video for the first installation in the series, Seascapes. It is a topic that has fascinated Moonen for quite some time now: on his travels he films and takes pictures of the sea. This acts as a counterpart to his regular work, which pivots around a concern for people. In these seascapes he turns his back on society and focuses on an environment that eludes human interference. The imagery is deceptively simple: water and air divided by the horizon. This apparent simplicity gives rise to a staggering variety. He presented a video installation at an exhibition of his photos. Seascapes is a further development of this.

The projections evoke images of the sea in various guises. You’ll see white-crested waves come rolling on in a surface of deep blue - a halcyon summer spectacle in which distortions emerge that gradually take over the entire view and transform into abstractions of waves or digital drops. Water starts to roll vigorously, as if whipped up by high winds. Magnificent vistas of colorful sunsets alternate with electronically composed and processed imagery.

The composition by Strijbos/Van Rijswijk runs along similar lines. Rich, layered white noise suggests sounds of water and wind - in calm waves and vicious lashes. Gulls’ doleful calls are pulled through modifying filters. In the distance, just about audible, elated voices of children at play. In between warm and lush chords roll on and subside. These tranquil sound waves grow grainy edges; sometimes they burst as if splashing in foam onto rocks. Played by cellist Jacqueline Hamelink they slide towards clusters with ominous overtones: powerful sub-bass pressure sets the space trembling and shuddering, making you feel thoroughly unsettled.

The installation presents ever-shifting perspectives on the sea. A force beyond measure that can break and kill, that exceeds human proportions by far; but there’s also the soothing effect of waves in permanent motion. The extraordinary impact of 360º/Seascapes is based on the evocative combination of visuals and sound. The images suggest that you hear rolling waves, whereas the sound is actually electronically composed and processed white noise. On the other hand the sounds directs how you experience the imagery. They fill you with calm and tranquility, but also with apprehension and discomfort. This effect is enhanced by the fact that the installation surrounds you like a landscape. What you see and hear moves around the space. You feel the urge to turn around, alert to what might happen around you. You just can’t undergo 360º/Seascapes passively. It is an installation that keeps you on the edge of your seat. Read all about this project
More upcoming events 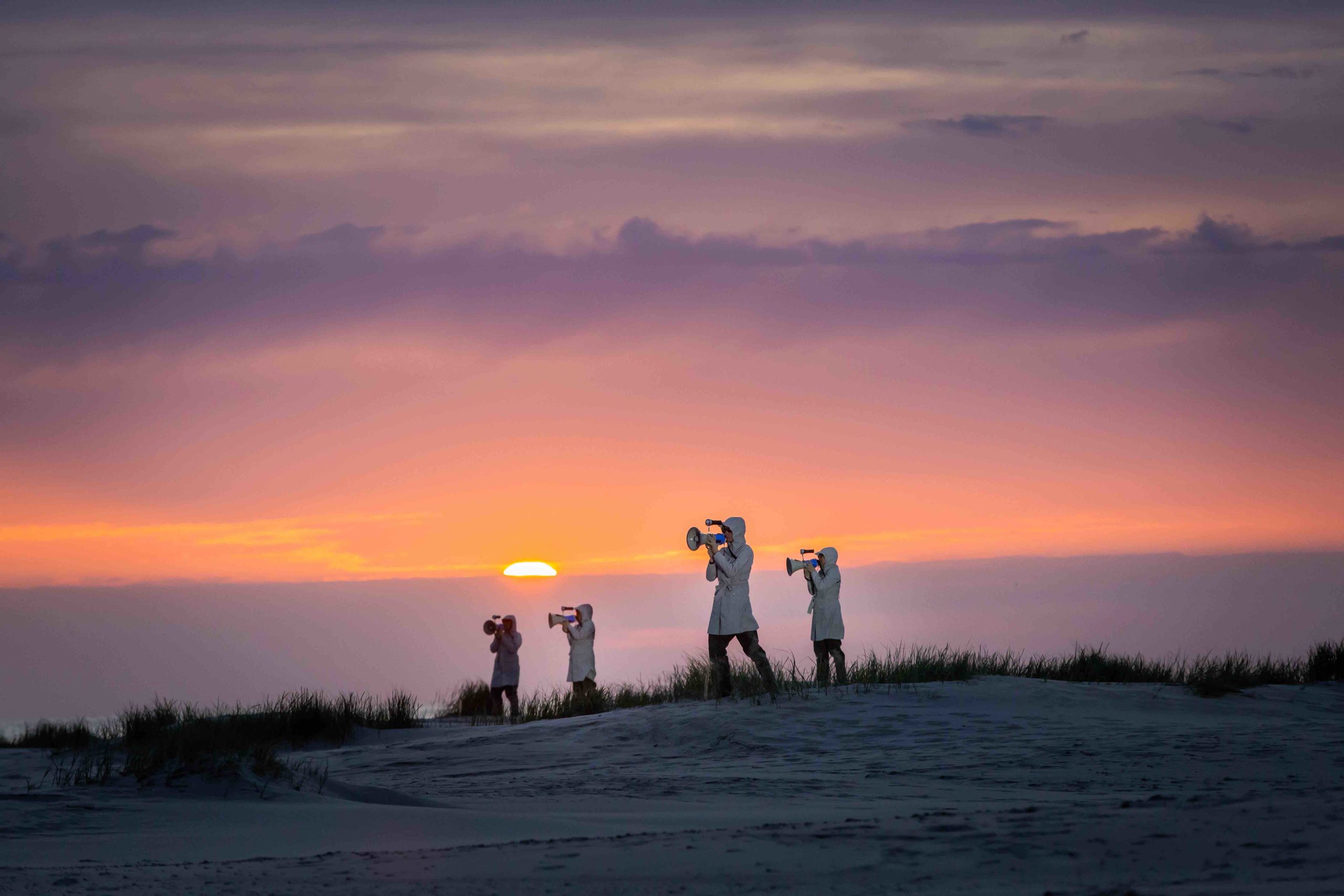